There are many projects the members of the National Association of Leavitt Families have been working on over the years, including the following:
- Vital record collection of all LEAVITT names, a nationwide project. Some are now in our Members-only webpage. 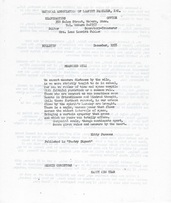 Early newsletter sample, from 1955
- Scanning and indexing of the early Association newsletters
Following its organization in 1934, the association printed an annual report of that year's reunion, which was mailed out to paid members. Starting in 1945, they began adding more material to the bulletin, which would later change into the quarterly newsletter we continue to publish today. This newsletter, as well as the NALF itself, went into hiatus in the early 1970's, when the secretary became ill, and there were no volunteers to cover this vital position. In our archives, we have copies of nearly all of the newsletters, from 1934 to May 1971. All of them have been scanned, and an index is being prepared, so a compiled volume of these early works can be published in the future.
- Republication of our Leavitt genealogies
We are computerizing our previous six volumes - Thomas Leavitt, and the 5 sons of John - and adding additional documentation, families, dates, and locations.  This is an overwhelming project that keeps getting delayed because nobody has time to record all the new records becoming available. We are making slow headway, but have NO projected date when any of the volumes might be published.  The sooner the better, though. We would love to hear from Leavitt members who would like to take on a section of families. Contact Roland Rhoades, NALF Genealogist.
- LEAVITT Y-DNA Project
​Project begun in 2007/08 to test male Leavitt descendants of the immigrants John and Thomas, to see if these two lines had a common ancestor. One was not found. Project now includes many other males with various spellings of the Levitt/Leavitt name, from England, Canada and the U.S.
​Several other Leavitt lines have now been established, unrelated to the others.
​See our new May 2017 {DNA webpage} which hopefully answers all your DNA questions.